*The following review was written by Stacey Lannigan and contains spoilers for the musical: Hamilton*

Watch The Trailer For Hamilton HERE

For those of you, like me, who would never have had the opportunity to travel and witness Hamilton live on stage would have been just as thrilled when the news was dropped that Hamilton the musical was to stream on Disney+. Having listened to the soundtrack non-stop for many months, I finally was able to witness the story from the comfort of my own home and after witnessing the musical for myself, I have decided to share my thoughts and feelings about the production with you all.

Note: For the purposes of this blog, Hamilton the musical will feature in the category: movie reviews.

Hamilton tells the story of one of America’s founding fathers, the first Secretary of the Treasury: Alexander Hamilton. Presented live on stage in the form of a musical, the production has now become available to watch on Disney+, directed by Thomas Kail.

5/5 stars goes to this mind-blowing musical which brings America’s past into the present to both educate and entertain audiences worldwide. This history lesson performed on stage holds the perfect combination of catchy music and fantastic choreography that will have all viewers both singing and dancing along to the infectious beats!

As far as the plot goes in telling the story of Alexander Hamilton, to someone like me who has very little knowledge of America’s history, the musical is both insightful and inspiring. From Hamilton’s determination to rise, to the events that caused him to fall and the individuals who he inspired all made for a dramatic viewing that kept my eyes glued to the screen for the musical’s entirety!

Personally, I’m a sucker for a romance and Hamilton provided me with everything I could ever have wished for in a good romantic tale! From Hamilton and Eliza’s relationship to Angelica’s longing for the man she allowed her sister to have, I spent the majority of the musical believing that something would come of Angelica and Hamilton’s affections for one another.

I was then taken by surprise when another woman became the cause of Alexander’s affair. . . 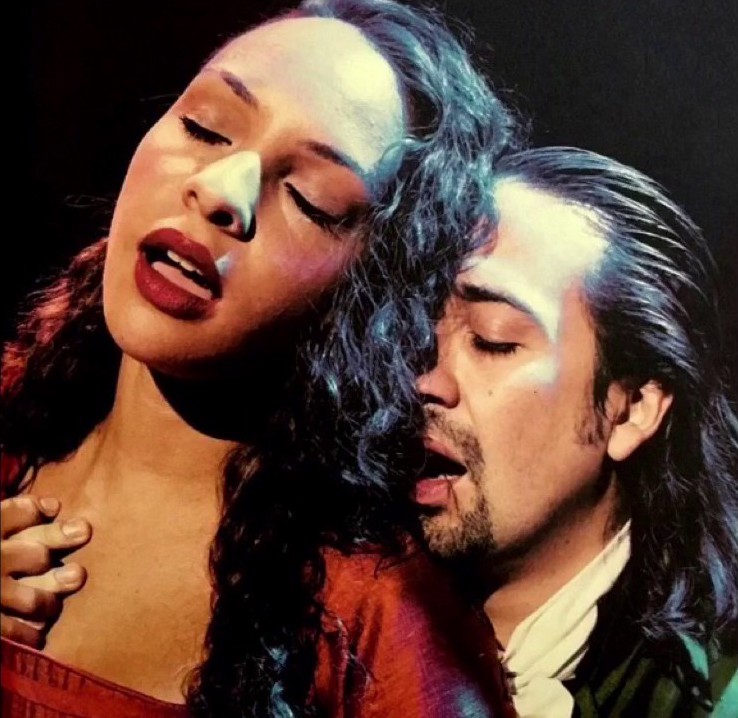 Meet Maria Reynolds who became Alexander Hamilton’s mistress from 1791-2 and as consquence played part in the release by Hamilton of the Reynolds Pamphlet. This affair surprised me, especially as a part of me believed that Hamilton would not have committed such an act as adultery and partly because I thought that, if he had, then it would have been with Angelica.

The acting of the cast and the portrayal of these characters was another highlight of the musical, especially in the more emotional scenes such as Eliza discovering Alexander’s confession of the affair and both hers and Hamilton’s reaction to the death of their son.

One thing which I particularly enjoyed was Hamilton’s relationships with the other characters, such as his friendships with Laurens, Lafayette and Mulligan. In addition to this, the dynamic between Hamilton and Aaron Burr and the shift in their friendship as the years went on was also fascinating to watch play out on stage and through song. Their similarities work well at making their differences and the shift in their friendship all the more realistic, as they both work toward their goals and grow more distant until their inevitable and duel.

The soundtrack to the musical, which I have been listening to for months prior to seeing the show, draws heavily from hip-hop as well as many other genres of music making this hip-hop history lessons all the more engaging! Songs such as ‘Alexander Hamilton‘, ‘Satisfied‘, ‘Wait For It‘ and more all help tell the tale of the life and times of Alexander Hamilton.

Overall, Hamilton was perhaps the best on-stage performance I have ever seen and is – without a doubt – something that I would watch multiple times and recommend to everyone that I know! The final song ‘Who Lives, Who Dies, Who Tells Your Story?‘ can be answered by looking toward Lin-Manuel Miranda and all those involved in the production of this musical, and we thank you all for doing so!

So what are you waiting for? Check out this video on how Hamilton has become a cultural phenomenon and then head over to Disney+ to give the musical a watch!

Perhaps you’ve already seen Hamilton?
If so, let us know your thoughts down in the comments below!

Have A Say! Cancel reply

This site uses Akismet to reduce spam. Learn how your comment data is processed.